The Fool on the Hill – is it me or everyone else?

An old Israeli joke tells of a certain Israeli politician (who for politically correctness purposes shall remain nameless) who, while driving on the highway, receives a call from his wife. Frantically, she informs him she just heard on the news that some lunatic is driving in the wrong direction on the highway. Even more frantically, he responds “one lunatic? there ALL driving in the wrong direction”! 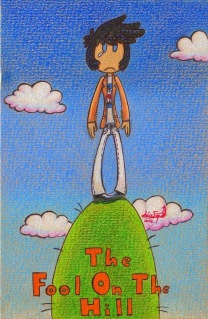 That kind of sums up my underlying feeling during Sukkot in Toronto so far. So much of it seemed “off”, purely ritualistic, even fake. A few examples are these:
1. During the days leading up to the Chag, everyone was busy building Sukkot and buying Arba’at Haminim. I couldn’t help but feel they are missing the point – these are celebrations of the land of Israel and by choosing to celebrate it in Chutz La’aretz it seems an imitation, even a mockery.
2. The Birkat Kohanim during Chagim in Chutz La’aretz has a special atmosphere due to its rarity; announcements are made and special tunes are used, etc… But for some reason all I could think of during Birkat Kohanim is that the rest of the year we DON’T say Birkat Kohanim in Chutz La’aretz because there is no Simcha (joy) in Chutz La’aretz except on Chagim and Simcha is a prerequisite for blessing the people. Was I the only one thinking to myself “this reminds me – why do I choose to live in a place which is Halachically defined as joyless and without happiness?” or, “what is wrong with the way I lead my life that I don’t even notice that my life is defined as Halachically joyless?”
3. The first two days of Sukkot had wonderful weather. For the first time in years, supposedly, all meals of the first two days could be eaten, comfortably, in the Succah. I was speaking with an acquaintance after Shul on the second day when she said “this Sukkot weather is so great. It’s like being in Israel!”.
Am I the only crazy one who couldn’t just enjoy the Chag, with its myriad beautiful Mitzvot, or is everyone else crazy for not realizing that once you choose to stay in Galut all that’s left is empty, insincere rituals? especially with a holiday like Sukkot?

Filed under Chagim/Holidays, Israel and Galut